Two apartment buildings seemingly separated by time, architectural language and location, but both within the same German city of Essen, were seen in this work to be highly symbolic in denoting the changing working behaviour and industrial base of contemporary society. For both buildings had as their intended function the housing of workers within what had been planned as an ideal environment, that was expressed in the design of the buildings and in their landscaped surroundings.
In South Essen, at Margarethenhöhe, a housing estate of apartments was built between 1910 and 1929 to house the steel workers of Friedrich Alfred Krupp. The estate was developed along the ideas of Margarethe Krupp (1854-1931) as an idealised environment for the families of her husband's workers, and reflects her thoughts about the traditional language in building applied to the then contemporary present. Now this estate is a highly fashionable place to live for the professional middle classes of Essen.
The second building was constructed in the 1970s in North Essen at Katernberg, and mainly housed workers in the surrounding coal industry. The large municipal estate in North Essen is landscaped to bring nature into people's lives, with large areas of green between the slab blocks of apartments. As the mine and processing plants such as those close by Kokerei Zollverein have now closed, inhabitants are now migrant workers and the remnants of the old unemployed miners.
Layered onto the buildings, and the surrounding environment is a language of signs and objects that denote the existence, identity, behaviours, attitudes and beliefs of their inhabitants. Using a Super 8 Film Camera and a tape recorder, a walk was first made around the building in Margarethenhöhe, South Essent and then the next day the same procedure was made around the building in Katernberg, North Essen. Signs, objects, textures and ambient sounds were filmed and recorded as they were encountered in the process of moving around the building.
Text by Stephen Willats to accompany the work 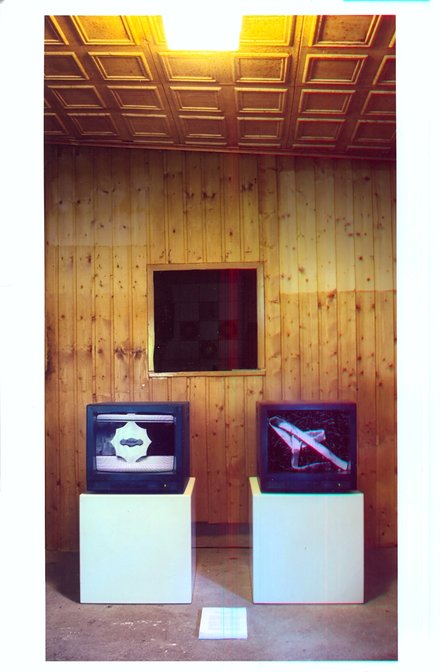