What Made Me Like I Am centres on the ways in which an individual is viewed within society under the predominant consciousness. How these ways of viewing exert a pressure on the individual to conform to stereotyped or expected patterns of behaviour. The individual woman in the work is seen as a symbolic woman, inhabiting a symbolic world surrounded by the institutions of society, the individual is seen on an enclosed track within images of potential problems and conflicts.

The viewer is cast into the situation of trying to understand oneself as a social product and asked the question, ‘What Made Me Like I Am’. The setting of a question generates interaction, further developed within the framework of attitudes and visual cues which act as a territory of references. These references are held within a concept frame consisting of four axioms used to hold the contextual imagery and references from the symbolic individual’s world. There are two sets of concept frames; the first associated with the predominant consciousness – My identity, My values, My codes, My behaviours, - and the second series are from a counter consciousness – Another understanding, Another conclusion, Another perception, Another intention.
The work is conceived as context dependent and is referenced to a particular setting around the Avondale Estate in Hayes, West London, chosen as a symbol of the context in which most people live their lives. The estate and the surrounding neighbourhood, is used to provide an actuality and consistency to the loading of references and attitudes in the work. The institutional imagery of the predominant concept frame has been drawn from the nearby shopping centre of Hayes, while the counter concept frame uses adjacent waste land, which although surrounded by the institutional structures of society lies unused and quite outside the boundaries of socially acceptable norms and conventions. Not only does the area's condition represent the physical effects of modern society's waste output, or alienation from natural environment, but it is also used by local inhabitants for activities which could not be engaged in or fulfilled within their social rules for everyday life. It therefore functions as a territory of counter imagery. 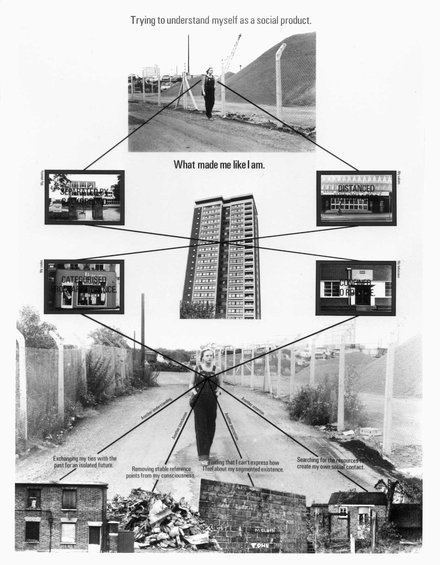