Sorting Out Other People’s Lives, 1978

This work was made with residents of the Ocean Estate off the Mile End Road in London’s East End for his solo exhibition, Concerning Our Present Way of Living at the Whitechapel Gallery in 1979. It was one of a group of works made with local communities that made a relationship between the enclosed world of the gallery and the actual world of those living nearby.

Willats saw this estate as a contained environment and the woman in the work as an important local spokesperson, acting as a catalyst for the community despite her other day-to-day pressures. The work was formulated through tape-recorded conversations and photographic studies made with the woman and her husband.

Each panel shows the woman within two contexts – that of her home and that of various community organisations with which she was involved – and each represents a differing area of her reality:

Family life as defined though environment, education, economic circumstances and social situation. These themes are matched in the lower half of each panel with a sequence of organisations in which she was involved; the Tenants Association, Claimants Union, Furniture Workshop and the Citizens Advice Bureau. Each panel contrasting the inner reality of home with the wider reality of active involvement in community life.

Although the woman depicted is shown in her own surroundings, dealing with bringing up six boys when her husband was unable to work through sickness she still involves herself in the running of four community organisations and serves as a symbolic figure in the work. She symbolises a refusal to remain passive, a will to set up mechanisms for self-determinism, countering the institutional pressure around us. 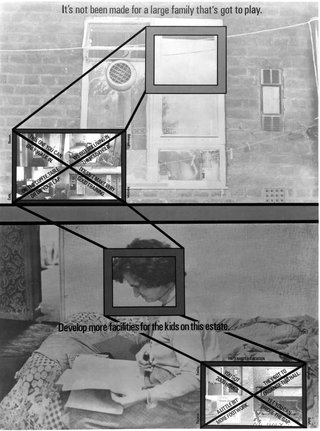 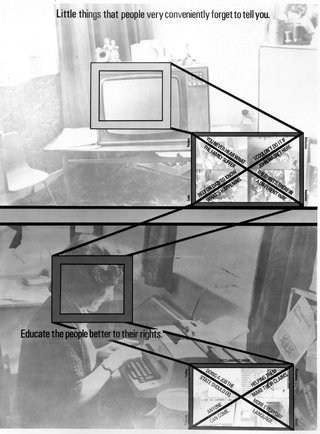 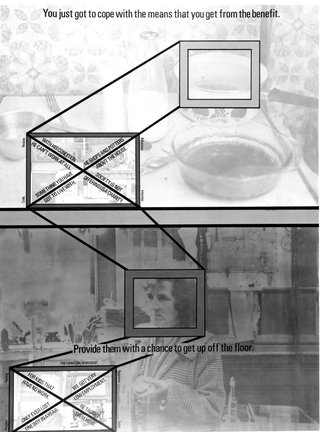 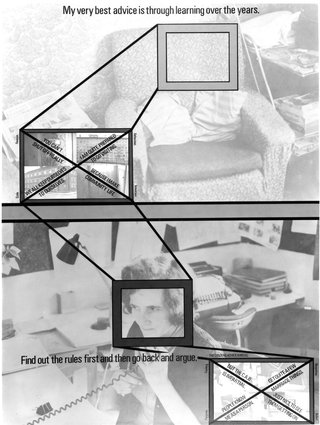