Going back to the Avondale Estate in West London where he had worked at various times in the 1970s, Willats was introduced to Pat Purdy who grew up in one of the blocks. The resulting work, Pat Purdy And The Glue Sniffers Camp was the first wall installation to include found objects and in which the participant wrote directly on to the work itself. In 1982, Willats described the work:
‘As with all my works, while I have a general idea of its direction before I meet people, the outcome is always a result of what is mutually established. What transpired from my conversations and later taped discussions with Pat Purdy, was the great importance the wasteland had that lay directly adjacent to the estate….As a result of walking around the wasteland with Pat Purdy and discussing what she did there, I came to realise the central role building camps had for the teenage youth living on the estate. A primary activity in the camps was glue sniffing, a can of Evostick being heated up on a small fire placed amongst a ring of car seats, or discarded tyres.
After a number of meetings with Pat Purdy, when I photographically documented her environment on the estate and made a number of tape recorded discussions, the structure of the piece emerged. The work is divided equally between the deterministic pressures emitting from the estate, and the wasteland, which is seen as the context for resisting those pressures by creating a counter consciousness. Having developed the basic structure I went back to one camp that Pat Purdy was particularly associated with, photographically documented it, and then took away all the discarded objects that I could find there. Instead of, as in earlier works in the 1970s, trying to create a Symbolic World for the audience that was slightly removed from their own reality so that they could make freer conceptualisations by being detached, I felt that current tensions required a more immediate confrontation. I therefore decided to embody the collection of objects found in the camp directly in the work, and to ask Pat Purdy to write her own quotations straight on to the photographic panels connected with the wasteland. A number of sessions were arranged at my studio, where Pat Purdy wrote her quotations and directed what objects and photographs I should use in the piece. The process of making the work took nine months, and was only finished when Pat Purdy finally gave it her approval.
The Structure of the Work
The work is developed around four functions the wasteland has for Pat Purdy, who symbolises the individual trapped within the confines of the New Reality. These four functions form a sequence of states in the work:
1. Relieving the tension
2. Establishing self-identity
3. Expressing own values
4. Formation of a community
Each state is made up of a tryptich, the left hand panel centering on a particular pressure emitting from the New Reality, and the middle panel being located on the boundary between the two realities, the right hand panel expresses the freedom found in the wasteland. A question is used as a trigger on the left hand panel to initiate a journey between the inner tension of the New Reality to the freedom of the wasteland, and then as a feedback into the New Reality. The boundary is highly significant as the crossing point for the individual into the wasteland, and transported objects that are agencing activities there. The journey through the estate boundary is a loop that the audience actively enters into, constructing their own model of counter consciousness from the experiences and references presented from the two opposing realities.’ 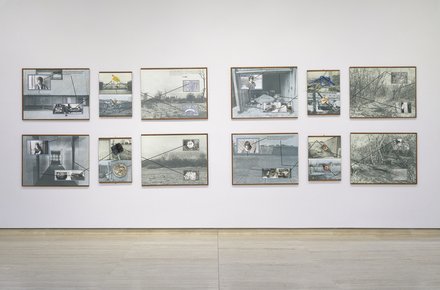