In 1962 I was looking at the organic structure of environmental experience, its random base, how it was the perceiver who created order, who gave it all meaning and coherency and this gave rise to a series of drawings that explored the structure of ‘modern buildings’ and simple piles of stones or bricks. The participatory sculpture Organic Exercise came out of one of the drawings (Organic Exercise No. 1 Series 2.) which acted as a catalyst for the form of the work, which was to be, what I termed ‘event based’. The work demonstrated to the participants the idea of self organisation and relativity, and the potential of their own creative decision making by them actually engaging in a process of making decisions. A set of variables was provided on a grid, which was left for people to participate in rearranging as they thought fit, interesting, or meaningful etc,
The variables are plaster blocks all of the same size and weight which start the beginning of each day as a square in the middle of the grid, and then as the day progresses are reorganised and distributed over the grid, one person leaving their set of blocks in place for the next person to continue working with, and so on as a series of events by the participants within the territory of the grid. The event based sculpture was seen as a ‘tool’ to be used in creating a process through time, not as an emulative object and therefore it was deemed permissible for it to be continually remade each time it was presented, the concept and rules and events for its presentation and the experience of participation constituting the work, and so it has continued until this day; each time it is presented it is remade and then destroyed.
Stephen Willats 2014 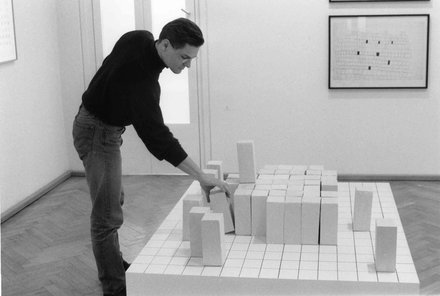 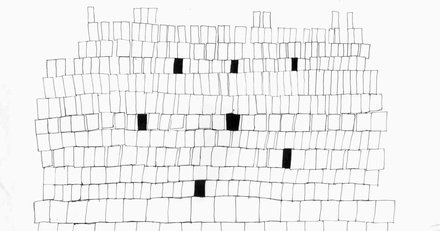 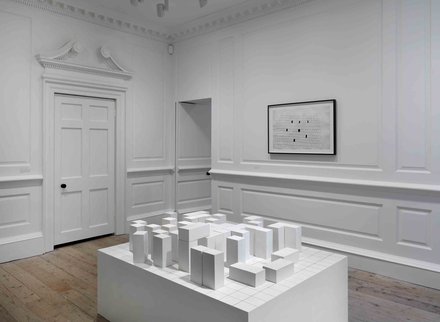 Organic Exercise No 1 Series 2 with the drawing on the wall at Raven Row, photo Marcus J Leith 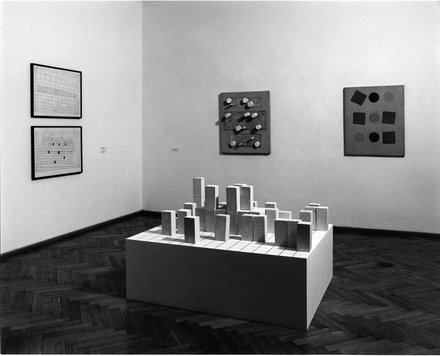 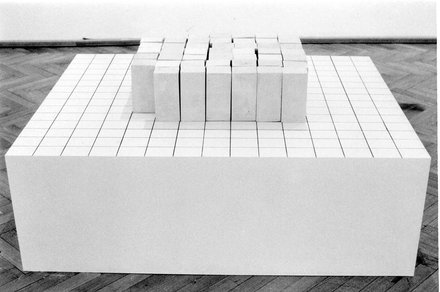