Man From The Twenty First Century, 1971

The work grew out of my attempts, while lecturing at Trent Polytechnic in Nottingham, to examine the kinds of strategies and languages the artist might employ to externalise art practice. The examination concentrated on the contextual languages and behavioural routines of two typical groups of residents in Nottingham, knowledge of which I felt would be useful in devising strategies for a future artwork, involving the same or similar social groups.
The two areas of Nottingham that were selected were Hyson Green, which is a typical Victorian terraced working-class area; and Bramcote Hills, a new middle-class housing development on the outskirts of Nottingham and the film was part of the reconnaissance of the two areas. Two surveys were devised as an information-retrieval mechanism, one dealing with leisure and shopping habits to see whether they overlapped, the other to ascertain the individual coding structures of the two groups. It was hoped that the first survey might come up with a suitable context in which to site an artwork, and that the second would provide appropriate languages. Both surveys used a closed question format, the interviewees recording their responses with just a few words or a tick. The procedure was for the questionnaire to be distributed by door-to door canvassing, and left overnight with the interviewee. The survey on leisure and shopping routines was the first one to be tried, and it was noticed when examining returns that the particular canvasser, who had dressed to typify the person he was interviewing, did considerably better than the one who presented himself looking like a student. As a result of the generally low response with the first survey, it was decided to rethink the presentation of the second survey, taking note of the experience of the student who bothered to relate to the interviewees.
It was considered that by working within the existing references and experiences of the two social groups, a higher response could be achieved. This led to the idea that the second survey should be modelled on a typical neighbourhood advertising strategy which it was felt both groups would have experienced. This led to the conception of ‘Man From The Twenty First Century’, which was related to the methods employed in advertising and in films such as those on space travel (eg Star Trek) that use a context remote from the audience’s, in order not to inhibit identification with the moralities expressed. While the project was never fully realised it had a huge impact on later works of mine. It was conceived that a single interviewer would dress up in a silver space suit, and that he would arrive in the streets whose residents were to be interviewed in a silver time machine that was built around an old Volkswagen car. The time machine drawing up outside a house, the Man From The Twenty First Century would jump out of a hatch on the top, bound up the garden path with a walk that was unsteady, as if not used to Earth’s gravity and then knock on the front door. When the door opened The Man From The Twenty First Century delivered this line:- ‘I am The Man From The Twenty First Century’. and I have come down to Earth in 1971 to ascertain the way in which you perceive your environment’, etc. The actual arrival of The Man From The Twenty First Century was preceded by a small poster campaign to create neighbourhood anticipation.
The survey was made up of questions concerning clothes, transport, shapes, colours, household objects etc, familiar things. The response was over 90 per cent, which was largely attributed to residents enjoying the concept behind the interview by a man from the future, and because it represented something on an event in their neighbourhood. A large proportion of interviewees extended their answers to make elaborate maps, drawings, and writings, and this response subsequently paved the way for the use of the open question techniques that would encourage similar response developments in my later projects.
Stephen Willats
2013 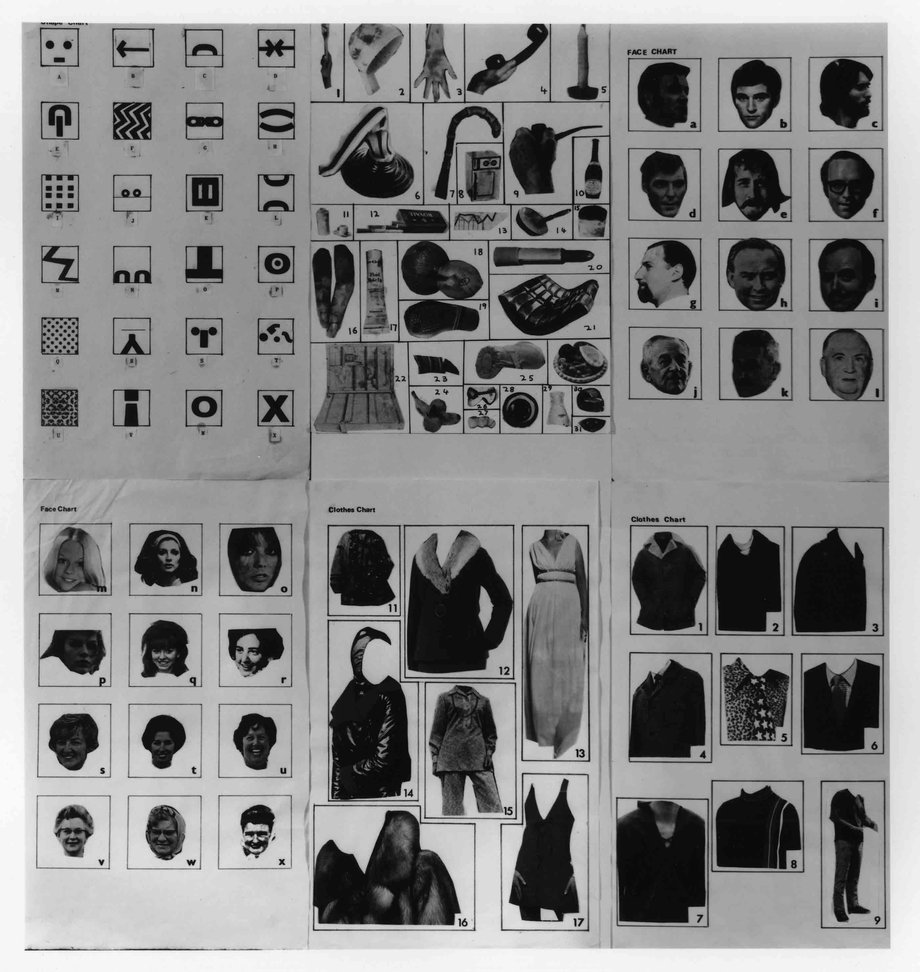 The series of montages used for the project 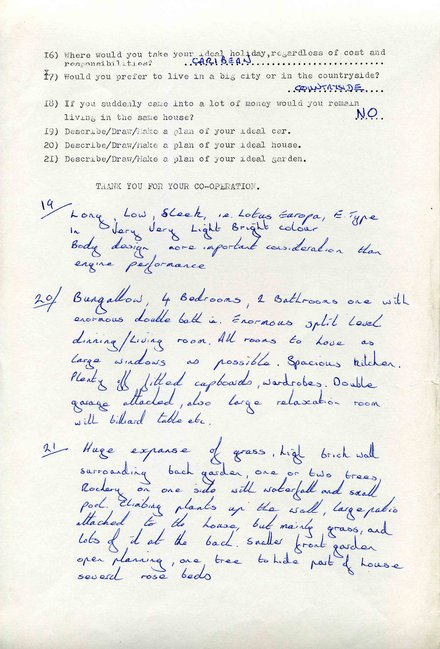 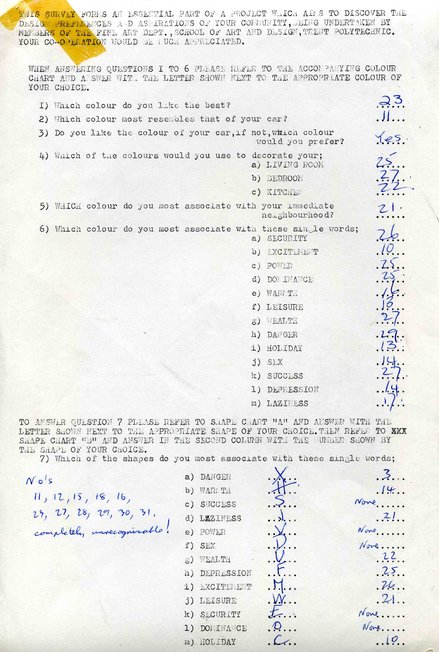