In this work, Willats wanted to bring together the process of the making of the work as a social model of exchange, with its presentation and reception by the audience. A further area for the work was the randomness of what we perceive and encounter in the everyday and how we create an order onto that randomness for ourselves.
The chosen setting was a shopping parade, as it embodied the appearance of normality, a predictive ordering, yet it is also a dynamic volatile situation of constantly changing events between people. Five actors were then asked to walk down the shopping street creating events that disturbed the normality of the setting and at the same time this series of events was documented by a larger group of film makers, artists, journalists that each recorded different elements of the events – eg. Facial expressions between members of the acting group, people’s reactions, institutional signs, ambient sound. The involvement of this wider group in documenting the event reflects the diversity and relativity of our social perceptions, but also questions the issue of authorship in the origination of a work of art. The aim here being to reflect that a work of art is not actually the product of any one person, but the result of society between people and that the society surrounding a work of art is the key factor in giving it meaning and validation, both during origination and then in reception.
After the event, a series of workshops was held with members of the groups to edit the material collectively to create a multichannel timeline of the event.
The resulting mosaic runs from right to left along a metre wall and presents a timeline of twenty columns of information taken from moments in the original event. Running horizontally are the individual documentations from each segment in the concept frame starting with facial expressions at the top. The work also includes audio tapes of the sounds recorded on the walk down the shopping street. To further open up the relativity underlying Macro to Micro, as well as providing a means for people to gain a personal access to its highly fragmented outface, four individuals were asked to write a personal guide to how the work might be approached and these are available to anyone when viewing the work.
Macro to Micro creates a mosaic of a Symbolic World that can be entered into as a parallel to actuality, for people to make their own connections and interpretations. Thus in the making of the work as a fragmentation of reality, reality is presented as a random variable, yet the process of making the work used a social model of agreement within a group. Yet the final impact of the work is in the self-ordering created by the individual viewer. 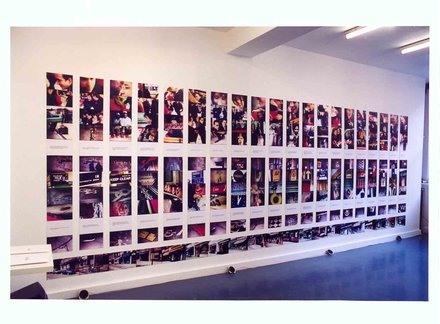 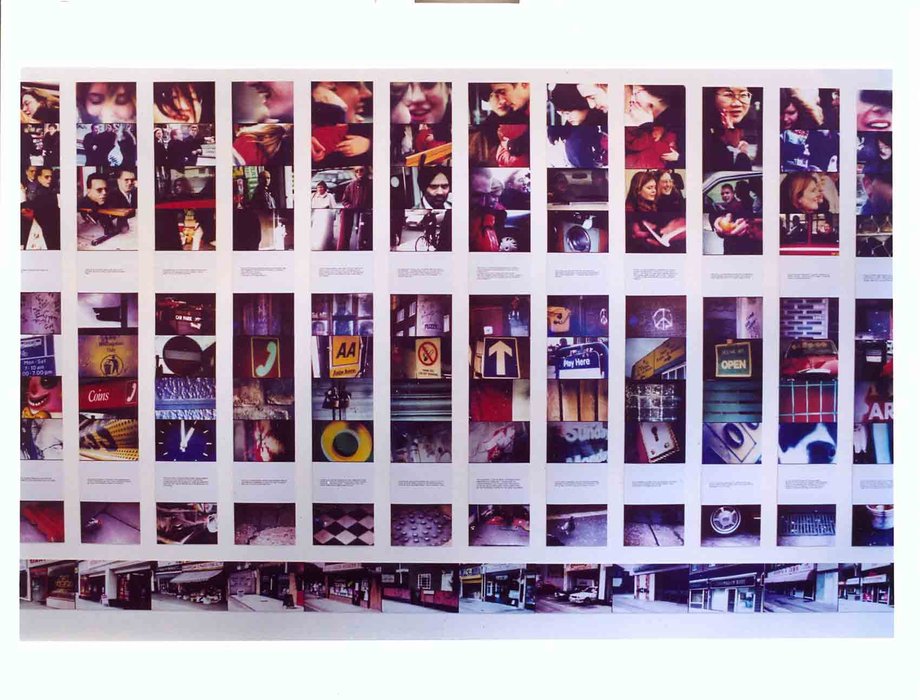