‘The tensions of inner city life, and in particular those that led to the riots in Brixton in 1981, form the area of attention for my work The Kids Are In The Street. These tensions are seen through the eyes of an eighteen year old boy, Paul Rogers, looking back to his experiences of street life as he left school and which finally erupted into the riots. The context for the work is the inner city, and more specifically the tower block where Paul lived on the Brandon Estate, at the Oval, South London on the edge of the Brixton area.
The tensions and frustrations of Paul Roger’s life on the estate are contrasted with his involvement with skate boarding at a specially built Skateboard Park nearby. The special world constructed by Paul Rogers and his friends through skateboarding was their means of escape and resistance to estate pressures, and in the work this world is seen as an expression of counter consciousness. The work is thus balanced between the concrete New Reality of the Brandon Estate that acted as a catalyst for the tensions experienced by Paul Rogers, and the concrete symbolic reality of the Skateboard Park that acted as a vehicle for them to express resistance.
The work is formed into a sequence of four tryptichs, each of which centres on a particular function that skateboarding had in relieving the tensions on the estate. The middle panel of each of the tryptichs is comprised of agents that directly connect the two realities, and is made up of objects collected by Paul Rogers from the estate, and his own photographs of the Brixton riots. The work therefore re-cycles the photography of Paul Rogers by embodying his prints, his own creative expression in response to the riots. Also embodied in the work are quotations written by Paul Rogers at my studio, where he directed, in a series of working sessions, what found objects and photographs I should use. My own photographs used in the work were selected by Paul and myself from photographic documentation I had made of him and his environment over a six month period. Also during the six months I made three tape recorded discussions and from these his written quotations were derived.
The territory established by Paul in the work is his own view of the hopeless future in store for teenage youth in today’s inner city. A whole combination of factors come together to build up the tension of the inner city, which is reinforced in a general way by the physicality of the new reality, unemployment, lack of amenities, no social, economic power, or mobility, all interlinked factors that build up to a point where it has all got to unwind in an explosion of expression.’
From Stephen Willats, The New Reality, catalogue by Orchard Gallery, 1982, p. 36 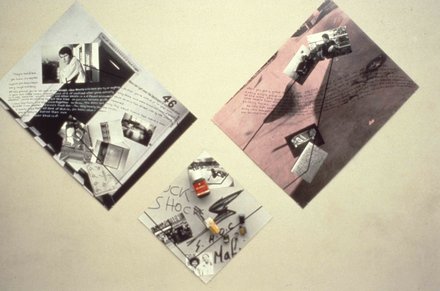 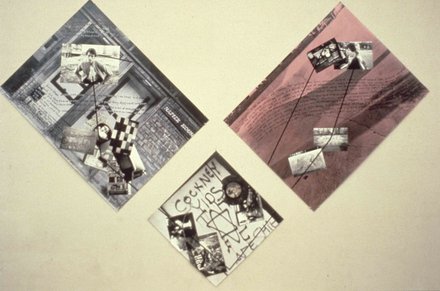