The work, I Don’t Want To Be Like Anyone Else centres on the six ways in which an individual is often viewed within society:
The individual as a statistic
As a partner
As a consumer
As a worker
As a political activist
As a cultural consciousness
These ways of viewing are looked at in terms of the pressure they exert on the individual to conform to expected patterns of behaviour. Made in 1977, in this work Willats uses a model to represent a symbolic individual and explained that: ‘A woman was chosen to be the symbolic individual in the work, since women have traditionally occupied a passive position in our social fabric’[i] The woman is shown within a symbolic situation, a world in which she is surrounded by the institutions of society – an environment of potential problems and conflicts.
The work places the viewer in the position of provider of possible solutions, as each of the panels asks a specific question, for example: ‘How do you think I can keep my own identity within this uniform world’
Below the image of the woman and the question are a series of texts and images referencing alternative ways of seeing the world. In the first set, images of the surrounding environment are overlaid with four texts, two presenting a negative view and contrasting with the two statements of positive values below.
The lower set of images present positive texts against more negative photographic images of what society discards. This area is more ideological, presenting what Willats describes as counter consciousness, another way of viewing the world.

[i] From Catalogue - Living within Contained Conditions, Museum of Modern Art, Oxford, 1978 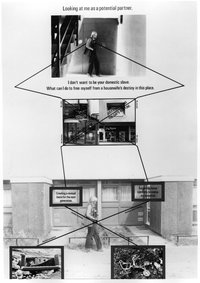 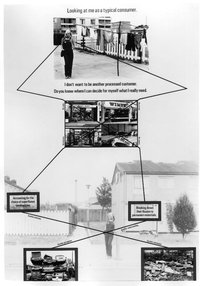 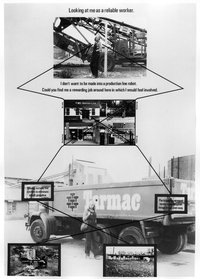 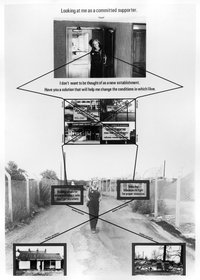 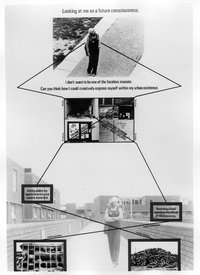