This new wall drawing was created for the Galerie Thomas Schülte in 2010.
It expands a Willats’ drawing onto the walls and inserts two 8 mill. films into the diagrammatic schema on the wall.
The drawing schematizes two Berlin tower block buildings and three vases that have been monumentalized onto an equivalent scale as the tower blocks.
One of the films made in Alexanderplatz in Berlin earlier in 2010 and inserted into one of the buildings gives a continuous series of people in pairs, in different relationships walking towards you. The other is a film detailing the architectural nature, and relationship of a changing sequence of three vases.
The work is pulled together by a series of pencil lines and arrows, linking the people and the objectified, diagrammatic buildings, thus contrasting the human and the smaller vases from people’s possessions against the reductive and monumental architectural diagrams of the tower blocks that ultimately contain people and their objects. 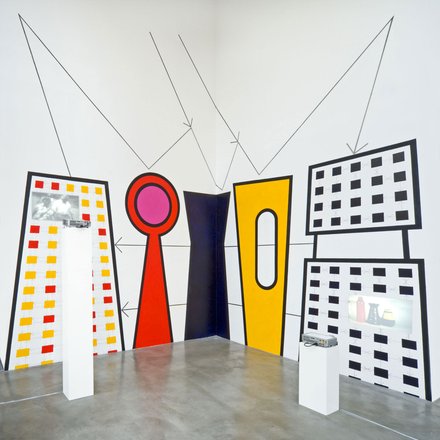