During 1962/3 Willats attended the Ground Course at Ealing Art School run by Roy Ascott and the course encouraged Willats’ growing interest in cybernetics and learning theory that can be seen in the Colour Variable series he made at this time. This moveable hand construction Number 3 from this series gives the viewer/participant the role of decision-maker in the arrangement of the smaller cubes and they then used a form to record the arrangement they had completed, thus enabling them to compare their decisions with those of other participants. These interactive elements were to be key factors in all Willats’ work.

‘This work was one of a series of six constructions which together formed a learning system. Each work in the system presented the participant with a set of variables held within a fixed framework that could be manually changed into a self-determined order. The set of variables increased from work to work, moving from a wall construction where only small changes of hinged planes were possible to the omni-directional possibilities of the large red cube, surrounded by sets of smaller cubes which could be plugged in on any of its six faces ….. Changes were to be noted by the participant on an accompanying form, displayed on the wall alongside the work. The series was designed to involve the participant in making relationships between perception, decision-making and self-determined behaviour’ 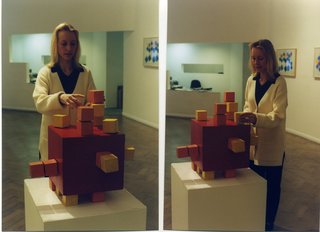 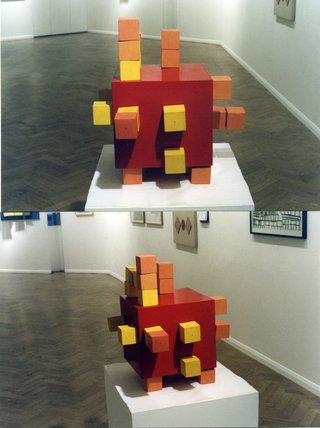