During the late 1970s and early 1980s, Willats became interested in the people that went to private clubs in London which functioned as capsules where they could create their own cultures and contexts.  The clubs represented a way for people to express their alienation with the normal, and come together within their own self-organised groupings.

The initial body of this work was presented in the Lisson Gallery exhibition of 1982, Inside the Night. ‘This work concerned one manifestation of those private clubs:  an extreme rejection of society’s values, an alienation from its idealisations, that found expression in non-conformity and through the display of aggressively tangential codes of dress and behaviour.’

‘The entrance to the Cha Cha Club was under an old railway arch, at the end of a narrow alleyway, underneath Charing Cross Station: The Club for people who don’t need to pose.  You can use the night as cover, as a cloak to be who you want, to be yourself, without anyone hassling you…The Cha Cha Club captured the spirit of this new generation’s attitude perhaps more than any other, where everything was possible if your attitude was right.  As a result of meeting members of the Cha Cha Club while making the work: Are You Good Enough For the Cha Cha Cha, I became aware of the extent of the night world that has recently emerged.  I went on to make most of my work over that three years with people who had been to the club at some point.’

The cover of the bookwork, Cha Cha Cha shows the seedy entrance to the Cha Cha Club.  Each thick page spread gives the left hand, white side of the book as the normal and boring world of the day and the right hand, black side of the book as the freer night world and focuses on the thoughts and lives of the two people who organised the Cha Cha Club – Michael and Scarlett.  Michael and Scarlett worked with Willats on the book through interviews and photographs of objects from their daytime surroundings and of people in the club.  Quotes from the interviews are on each page alongside photographs of objects from their daytime lives and of people who went to the club. 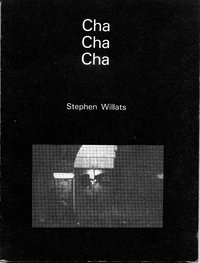 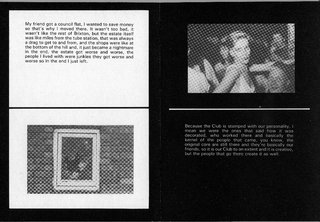